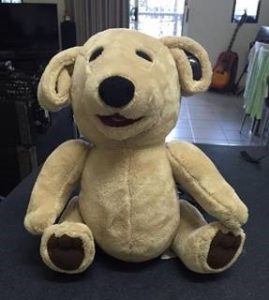 To create a portable Kodi (xbmc) media center and house it inside a plush teddy bear. Want it to look like a teddy with all electrical components (raspberry pi) hidden.

Hardware
Obviously all parts will be assembled and configured for use. The media center will be controllable by IR remote control or phone app (wifi or LAN connection must be available)

Software
Kodi is my favorite choice for media center software, I have used it on my original xbox, nexus tablet and an makeshift media center PCs. Details below.
Once configured I can stream media from my NAS whist at home or copy media to the device for viewing when elsewhere. There are many optional plugins available and its on a linux OS so the device can be tailored to do many things.

Kodi™ (formerly known as XBMC™) is an award-winning free and open source (GPL) software media center for playing videos, music, pictures, games, and more. Kodi runs on Linux, OS X, Windows, iOS, and Android, featuring a 10-foot user interface for use with televisions and remote controls. It allows users to play and view most videos, music, podcasts, and other digital media files from local and network storage media and the internet. Our forums and Wiki are bursting with knowledge and help for the new user right up to the application developer. We also have helpful Facebook, Google+, Twitter and Youtube pages. More info http://kodi.tv/about/

Teddy
I want to house the hardware inside the teddy with the power and hdmi cords neatly coming out the bum area. When not in use, I want the teddy to look fairly standard. I think it’s best to have the opening to the hardware fastened with a zip or Velcro. This is to enable access the hardware occasionally and it gives the option to put all the cords inside when transporting. Another positive to this is that we can leave the back open for ventilation.

Heat – I have been warned about the possibility of the hardware heating up and causing fire within the plush teddy. I must combat this risk by opening the teddy up while in use and/or incorporating cooling heatsinks.

8th October – All parts arrived and the hardware/software is assembled and confirmed working.

27th October – Sewing is done. Used a ‘hidden zip’ to conceal it as much as possible. It’s obviously noticeable but I’m happy with the result.

Case with built in fan – After discussing this project with people on reputable raspberry pi forums, guidance was given that the hardware should be ok in the teddy, under the proviso that none of the circuitry touches fabric. A case with built in fan was purchased to blow air on the chips at least.

USB Powered – It was also suggested that I ditch the wall power adaptor and only power it from the tv/amp usb port. This will ensure that when the tv/amp is off, the pi is too, thus minimizing fire hazards.

Everything came together as per plan. Apart from having to order a new case with built in fan, there was no road blocks or major variations. I’m happy with the result. Its super portable as intended and looks great perched next to any tv.